Articles on Blacksmithing and the NRBA

ROSCOE — There are matches made in heaven. And then there’s one special match made in Hamburg.

Its fire burns bright in the Beartooths where two German-born blacksmiths have settled happily in Roscoe.

Career chemists Frank Annighofer and Annette Lavalette are directing a fiery revival of an ancient art.

They reconsider their life together to be in its third phase.

The first phase began more than 25 years ago in Hamburg, where Annighofer hired his future wife to assist him in a chemical research project. (He earned his doctorate and she her master’s in the field.)

The second phase was in management consulting, when they traveled Europe “with hopes of changing the world,” Annighofer said, smiling.

“I yearned to work for Greenpeace,” said Lavalette. “And this fulfilled that need to feel as if I were helping a little.”

“We feel our work and research did make a small difference,” Lavalette said. While combining their research, their friendship and mutual desire to clean up their country ignited into a romance.

Phase three segued into their present life, beginning in the mid-1990s with a property hunt for mountain locales in the western United States. Returning to the San Jose area where Annighofer had pursued post-doctoral study, they’d come up empty until hiking the East Rosebud area.

“We were keeping our eyes open for real estate signs and when we saw this property, we thought it could be perfect,” said Lavalette.

The couple had socked away enough money for several years of travel, holding onto the idea of starting a blacksmithing operation.

“Frank sat down with a 10-year plan,” said Lavalette. “We had originally thought of California, but we were accustomed to the four seasons and knew we would miss that in California. We also wanted someplace less densely populated.”

Their “eureka moment” occurred about six miles down the road from Roscoe’s Grizzly Bar, when they spotted a “for sale” sign on the property that now includes their home and a shop created inside a double-garage.

“We wanted to do something fulfilling in our ‘retirement,’ ” said Lavalette, “something that would make us both happy and productive.”

That goal has come to pass. While completing their welcoming home — with hilltop views of the Beartooths and plenty of wood, stone and metal work — the couple has built a loyal clientele.

Lavalette has become Annighofer’s apprentice in the trade he learned from his forebears, a craft considered by many to be “king of the trades.”

“Frank is the real artist,” said Lavalette. “He does the branch of the tree and the first leaf. I do the next 99 leaves!”

Her modesty makes Annighofer smile with pride. He considers his apprentice both “talented and enthusiastic.”

Some of their work may be seen along the East Rosebud road, including an eye-catching wild Indian horse, a structure light enough to wave in the wind and a symbol of wilderness and freedom. Personalized ranch signs include one on the nearby Branger Ranch. It honors the world champion bull, Bodacious, who has a place in Montana lore.

Other examples of their work include an ivory tusk holder, based on an 1850 French piece, and an interior stair railing harking back to Colonial America with pineapple twists. Hot punched holes and hand forged rivets give a Medieval look.

A 1900s Hamburg photograph inspired a recent railing. Attached to solid logs, the iron has a playful look with its hand-forged scrolls and polished coating. The couple’s home boasts exquisite touches, including another European-style railing inspired by Germany’s elegant bridges and balconies. In their kitchen, an ingenious ceiling pot-holder harkens to ancient times. A playful dragon on the far end of the detail wards off demons.

In the shop below the home, the couple works comfortably together, donning protective eye gear and leather aprons. There they forge iron, copper, bronze and even stainless steel with finishes of shiny pewter, antique patina or rusty brown.

Annighofer’s blacksmithing roots go back three generations. Together, the couple has made a name for themselves in their time in the Beartooths, with commissions in Europe and a dozen U.S. states.

Along with railing and ranch signs, their body of work includes fences, custom tables, benches and bed frames and an eclectic variety of fireplace tools, wine racks and candle holders.

“The imagination is really the only limit,” said Annighofer. “People can make their own designs or leave it up to us. Or we can work together on a concept.”

“We can do just about anything,” added Lavalette.

The forging of iron ores is documented about 4,000 years back, in the eastern Mediterranean. References to bronze and iron weapons are found in Homer’s “Iliad” and Greek and Roman mythology. Vulcan was the blacksmith of the gods.

Annighofer serves as president of the Northern Rockies Blacksmiths Association.

“It’s a challenge to make something unique and individual,” said Annighofer, whose family were iron and coppersmiths in Prussia and Germany before he carried the craft across the Atlantic.

His elderly father, he notes with pride, has visited the couple’s Montana home, lending a hand in the shop.

“I suppose he is pleased that I have finally come around,” he said with a wry grin. Then Annighofer reaches for a file of his teenage drawings of railings and ironwork. “Maybe my father had a feeling. ... During summers in my college days, I worked for him in his shop. But I never considered it for my career. My father did, of course.” 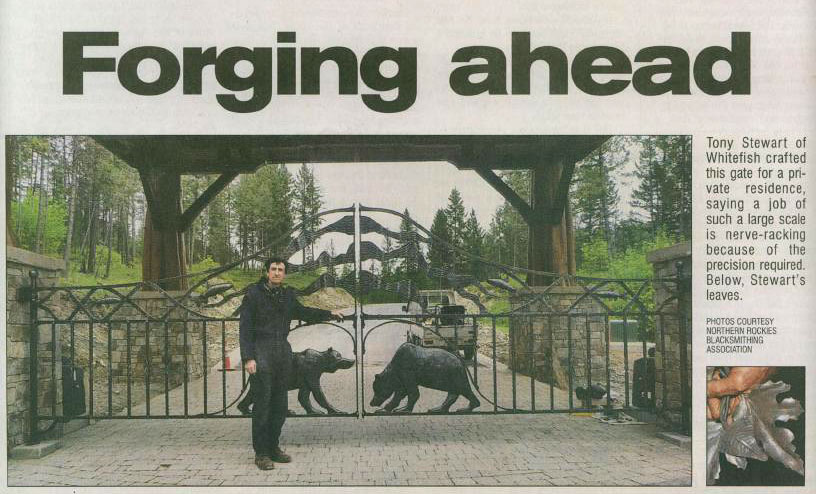 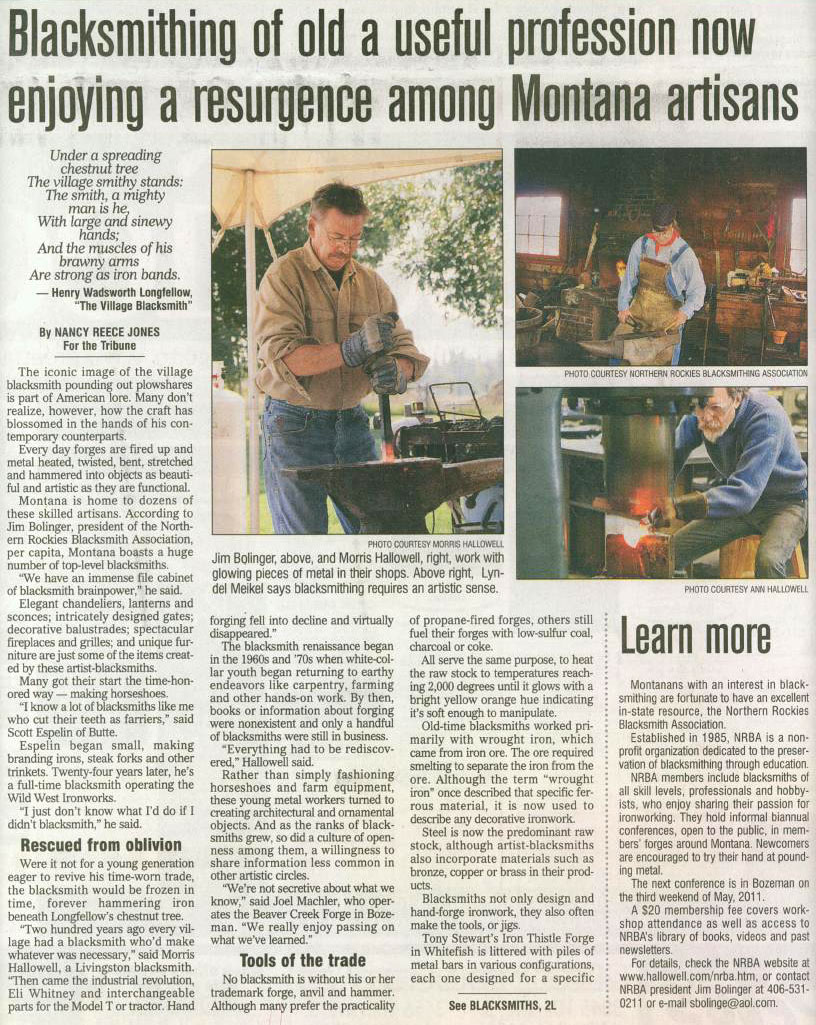 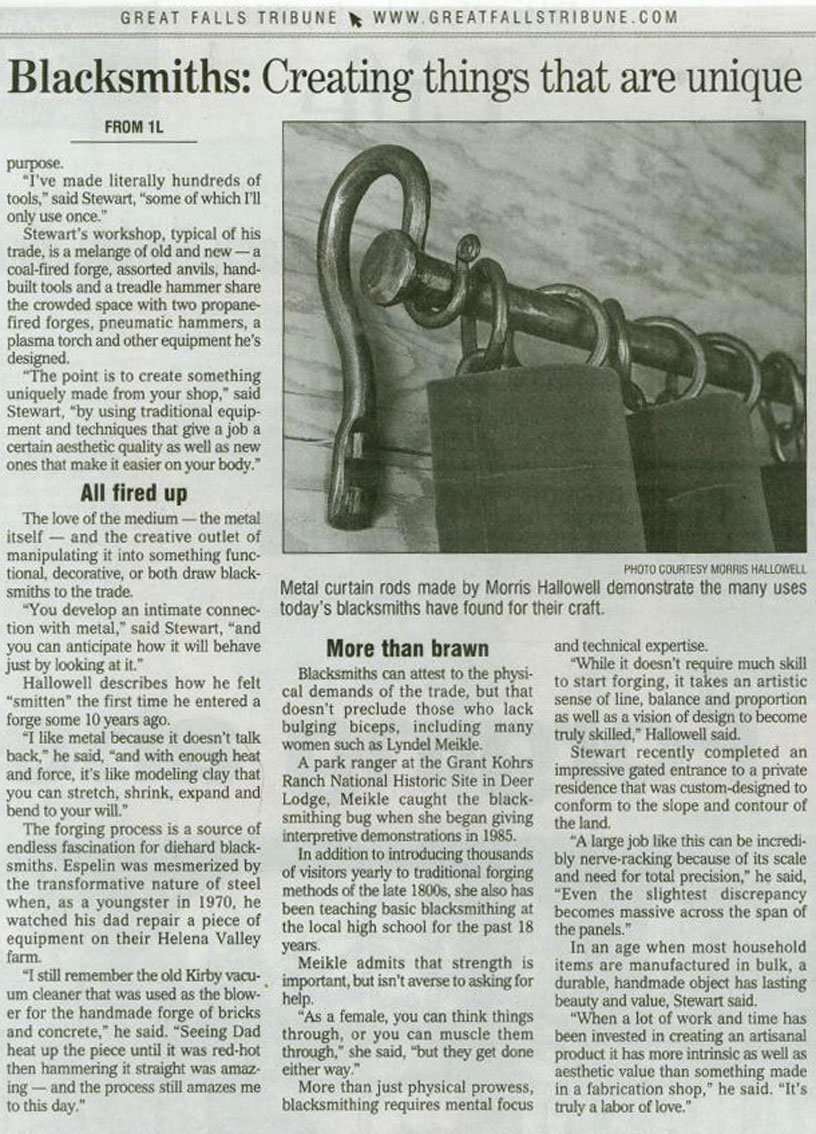 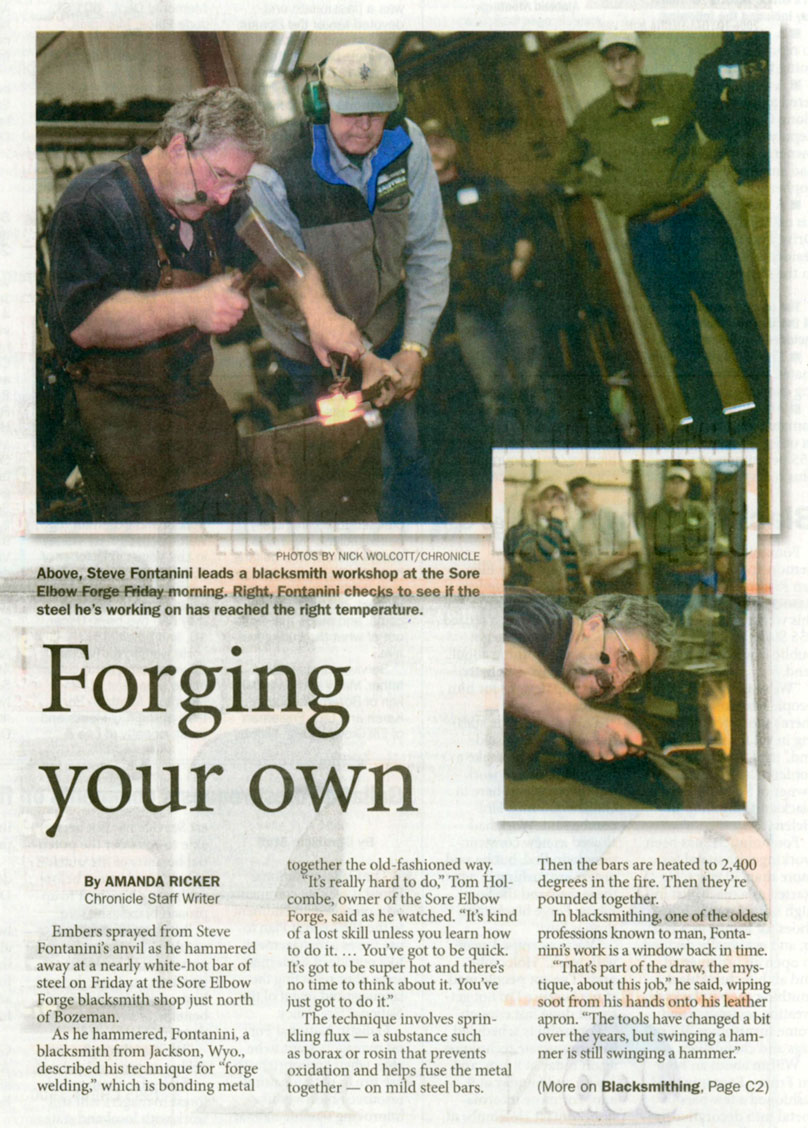 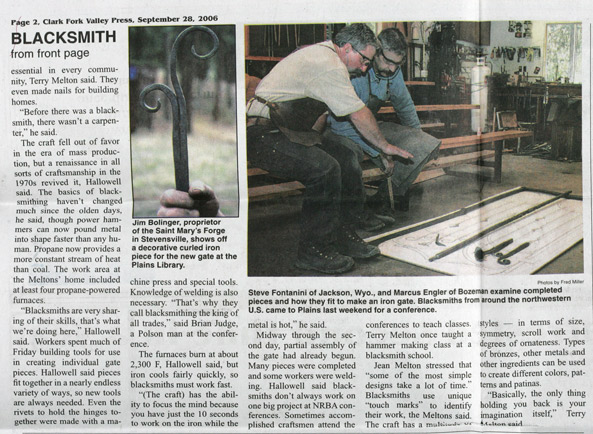